Did you always want a 2D version of Minecraft? Meet Terraria and test your skills in building and exploring like never before!

Dubbed by many as the 2D version of Minecraft, Terraria brings in some serious gaming experience for smartphone gamers. A multiplayer sandbox adventure game, Terraria has been installed 1,000,000 + times on Google Play alone!

So, what makes this game unique? Is it just a copycat of Minecraft? Or does it bring something new to the table? Does it push the boundaries of what smartphone gaming can accomplish? Let’s find out! 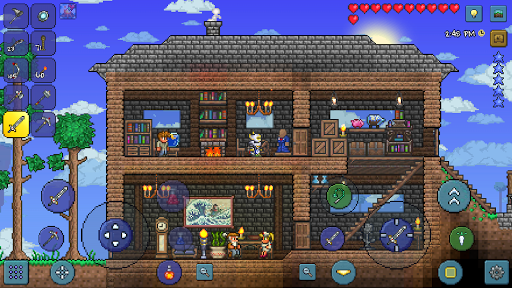 Terraria was originally just available for PC. But after a smash hit, it quickly came to the mobile gaming industry where it’s taking its strides. Immediately after being released in mobile, the game quickly rose to the top of the paid games charts and gained many fans.

So, how exactly does this game work? It can be summed up in 3 main words: dig, explore and fight. Think of adventure fantasies where everything unimaginable is a reality! The game starts as you cut down some trees to build shelters and then mining for resources to help you survive. Just like Minecraft, you have to collect precious minerals to craft weapons, armors and other items that will protect you from the monsters.

As for the weapons, there are plenty of them you can create namely 400 types of weapons from different classes such as melee, long-range, magic and more.

You can also just build houses for NPCs or go the easy route like riding, fishing and just exploring. The choice is yours, my friend! 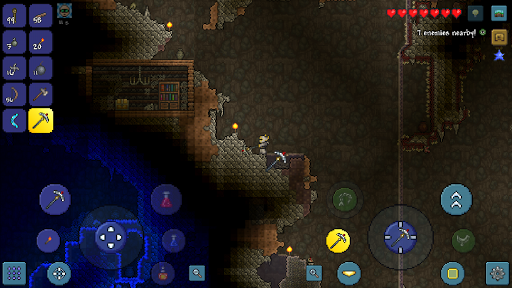 Terraria is an extensive game that was built with long-term in mind. Just like Minecraft, it lures you into its addictive features and wants you to play it for long periods of time. But what exactly does it offer? What are the features?

Fight different enemies – In this game, you won’t run out of enemies to face. Specifically, you will face against 300 enemies and 15 bosses. These can be zombies, skeletons, demon eyes, slime blobs and many more. These monsters can creep on you depending on where you are and what time of the day it is. You need to protect yourself from these monsters using weapons you crafted from minerals you collected. The bosses are also ready to take you out. But when you defeat them, they can drop rare items and huge numbers of coins. Think you can take them all on?

Multiplayer – The best way to enjoy a game this epic is with your friends and family, right? Terraria allows multiplayer for up to 7 people on local WIFI or online via a server. Together, you can battle monsters, build weapons and buildings and have the best time of your lives.

Over 20 Biomes to Explore – With over 20 biomes in the game, Terraria will keep you busy exploring for more! Explore underground caves, lush forests, deserts and more! These are truly amazing places to explore which will leave you speechless. Each biome is designed to perfection and there are items specific to those location. Explore each one and pick your favorites!

Build weapons and other items – If you’ve played Minecraft, you’ll know that everything is crafted even the weapons and armors. The same principle is true in Terraria. There are more than 1,250 crafting recipes in here to create weapons, armors, potions and more. Everything you’ll ever need is within the game. You just need to learn how to create them! Talk about putting your survival skills to the test!

Day/Night Cycle – Again, just like in Minecraft, there is the existence of day and night in here. You can’t just carelessly explore in the night because that’s where most monsters roam freely. You should explore during the day where monsters are weak.

Stunning Graphics – Even though the game style is pixelated and looks like an RPG from the 80s, it’s still stunning. Everything is well-designed and created with the ultimate gaming experience in mind. 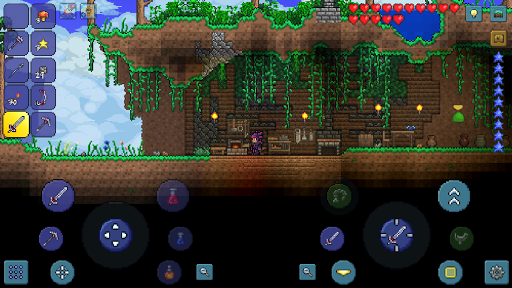 Playing Terraria for the first time can be quite overwhelming. Even though the game looks straightforward, there are a lot of things to do and to learn before you can get in terms with it. With that said, here are some tips to help you avoid beginner mistakes:

Build some essential tools – At the start of the game, try to get as much stone and Iron Ore to build a Furnace and an Iron Anvil. These will help you to create more weapons and other items.

Never fight a boss unprepared – It might be tempting to go after a boss for some sweet rewards but it’s not a good risk if you’re unprepared. Before you head into a very important battle, always take more than you think you need. That includes weapons, armors, and other items that may help you. Remember, depending on your mode, you might get expelled from the world if you die!

Chop down the bottom of a tree – There’s always an easier way to do things and when chopping trees in this game, try to chop the bottom block. This will allow the tree to fall instantly.

Terraria Mobile is a great game to combat your boredom with intuitive controls and complex gameplay. The world is open and the gameplay is endless as you explore countless open worlds in this game. Overall, it’s a fun and exciting game that’s reminiscent to the very popular Minecraft.